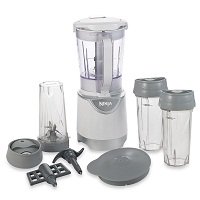 Ninja Blender Reviews - I have had the Ninja Kitchen System Pulse Blender BL204 now for about three months. I should have got one much sooner. Before that, when I made a smoothie, I used a Magic Bullet that I had bought at a garage sale. It worked okay, but it was definitely not a Ninja. I made a smoothie maybe two or three times a week, but now it's every day, sometime two a day.

I also have a Breville Juice Fountain for juicing, but I don't use it much since it's so hard to clean, and you don't get the fiber that you do with a smoothie. It also makes a lot of foam, especially in tomato juice. It's probably going to go on a garage sale soon. The food processor may go with it. Again, too hard to clean. Not knocking juicers, they are extremely beneficial to your health, just don't like the clean up.

I looked at a lot of different blenders and thought the Ninja System Pulse was just more bang for your buck. I had considered something like a Vitamix, but I'm too cheap. After reading the Ninja blender reviews on some of the web sites, I really liked what they were saying.

There are others that have started to imitate the Ninjas, but I figured, might as well go with the original. I had considered the Ninja Professional, but I thought it was too big and hard to clean, and would be like the juicer and not get used.

The main difference between the Pulse and most others is that there is no on/off button or speed selector buttons. After one of the blending containers is locked into place on the base, the system is pulsed by pushing down on the container. Hence the name "Pulse". To perform steady blending just hold down.

It is great for making smoothies. Just throw in some of your favorite fruits and veggies and some ice into one of the single serve cups and pulse. You can pulse until you get the consistency you like. I also make Banilla Ice Cream with it, which is just frozen bananas and vanilla. It is really good. I also make a lot of salad dressings with it. I use a lot of different non-fat vegan ingredients. I will post a few recipes when I get them perfected.

I have used the dough blade to make a whole wheat pizza dough and it worked really well, but I kind of prefer my Kitchen Aid Mixer for that task. I have not used the cookie dough paddle and probably never will.

What I love most about The Ninja Kitchen System Pulse Blender BL204 is the cleanup. Did you gather I don't like a lot of clean up? This thing is a breeze. A quick rinse or a toss in the dishwasher and your done.

Check out the video below. There are also more Ninja blender reviews on YouTube.

I bought mine at Amazon. I searched and found a $20 coupon and got free shipping, so delivered to my door it was $59.99. Also, a three year warranty. Read more Ninja Blender Reviews at Amazon.